Some of the links on this site are affiliate links.

By 2050, the world population is expected to surpass 10 billion people. One thing that is certain is that between then and now, the global production of food is going to need to increase significantly.

As investors, we're always looking for ways to get ahead of trends, and this is a trend to capitalize on.

In the past, getting into the agriculture industry was an arduous process. Purchasing farmland, raising crops, harvesting, and going to market made farming a lifestyle of hard work.

However, thanks to modern innovations, there are now a multitude of ways to profit from the growing need for food. One of which is to invest in a partial share of a fully-managed farm.

Readers of the blog will know many of the benefits of investing in farmland, however, investing in a farming operation is different. When you invest in a farm, you both benefit from owning the land and from the harvest.

This means that you're able to take advantage of the high returns of farmland and capitalize on the increasing demand for food. Sounds like a win-win!

FarmFundr was founded in 2015 as a way to allow everyday investors to diversify into farmland investments. The service is set up as a crowdfunding platform where deals are vetted and offered to investors. Each investor chooses whether to invest and how much cash to invest in each deal.

What sets the platform apart from many of the other crowdfunding farmland platforms on the market is the deal structure. As investors, instead of just owning the land, many of the deals are set up such that investors actually own the farm.

As a result, investors profit both from the appreciation in the land value and from the yearly harvest. When the crops are sold each year, the profits are divided up amongst investors. This means that investors capitalize on the growing need for food across the globe.

In the future, FarmFundr plans to expand their offerings into many other agricultural investment opportunities. This makes the platform particularly appealing for investors in search of alternative investments.

Currently, the deals on the platform are only open to accredited investors. However, the company has publicly stated their intentions to add offerings for non-accredited investors in the near future. It's unclear what this will look like, but we recommended creating an account on their site to stay updated.

In order to qualify as an accredited investor you have a few options.

FarmFundr was founded by Brandon Silveira, a fourth-generation farmer in Fresno Valley, CA. Brandon is also a real estate investor and has bought and sold millions in farmland. Currently, he manages over $100 million in assets and was listed in INC magazine as one of the fastest-growing companies.

Brandon is in good company as the rest of the leadership team has spent many years in agriculture and real estate investing.

One of the company's advisors, Richard Cook has served as the CEO and CFO of many other agricultural enterprises. During his 10 years as the CFO of McCarthy Farming, Cook oversaw the company becoming the largest agricultural organization in the country.

The FarmFundr platform is set up using a traditional crowdfunding model. Brandon and the rest of the FarmFundr team source and vet deals before offering them to investors. Once the deals have made it through due diligence, they are listed on the platform and investors choose whether to invest.

Each listed farm on the platform will have extensive information for investors to browse. This includes an in-depth look at the property, where the risks are in the project, and the target IRR for investors.

Each listing also has an expected holding period which typically ranges from 5 – 15 years. Investors should be prepared to hold their investment for at least this long as there is no secondary market.

The minimum investment required varies for each deal, but most are in the $10,000 – $15,000 range. Once an investor decides to go in on a deal, they are now a partial owner in that farm. Through the platform, they will receive updates on the deal and be kept informed about their investment.

Most deals also include equity investment from FarmFundr. This demonstrates that they stand behind the deals that they source and are willing to put their own money into them.

In man cases, the farms offered on the platform have been owned by the company's CEO for a number of years. During this period he typically works on getting the farms ready for investors and investing in optimizing the operations.

For individuals with $300,000 or more to invest in a farm, the FarmFindr program will work with you to find a deal that you can be the sole owner of. Through this process, you will work with an “expert farm manager” that will help you along the way.

Investors in this program are able to specify the commodities they would like to grow and even name their own farm!

Depending on your risk tolerance and time horizon, your expert farm manager will advise you on what decisions to make. You'll receive help structuring your investment, finding an appropriate farm, and making it a hands-off experience.

Additionally, you'll have access to advanced investing strategies like 1031 exchanges, solo 401(k)s, and IRAs. These can allow you to save on taxes and further customize your investing.

Even if you don't have $300,000 to participate in FarmFundr, you can still potentially use your retirement funds to make this investment. That's due to a partnership that FarmFindr has with RocketDollar.

RocketDollar is a company focused on empowering people to unlock their retirement funds and invest in what they know. They offer self-directed IRAs and self-directed solo 401(k)s that investors can use to take advantage of tax benefits.

This can be a great option for investors with the majority of their wealth tied up in a retirement plan that only offers stocks and bonds. By taking advantage of a self-directed retirement account, you'll be able to further diversify into farmland and other asset classes.

Many investors aren't even aware that self-directed accounts exist, but with the rise of alternative investing, they have only become more popular.

Farmland as an asset class has historically returned 11.5% since 1990. During the same period, the stock market grew an average of 11.1% but experienced more than twice as much volatility.

The investments of FarmFundr differ from other farmland investments because instead of receiving rent payments, investors get a cut of crop profits. It's uncertain how this will impact the returns, however, it will likely increase volatility.

When farmland owners are paid rent from farmers, they are somewhat protected from crop risk and weather risk. However, when returns are tied to crop yield, there is the potential for these risks to impact investors' returns.

At the same time, there is the potential for increased upside. The California Almond Orchard on the site produced 8.8% more almonds than expected in the first year and sold them for 6% more than expected.

It's important to keep in mind that since this is a newer platform, there is not a ton of data. FarmFundr has not had any investments go from inception to completion yet. This means that time will tell whether the projected IRRs on the site are reasonable. 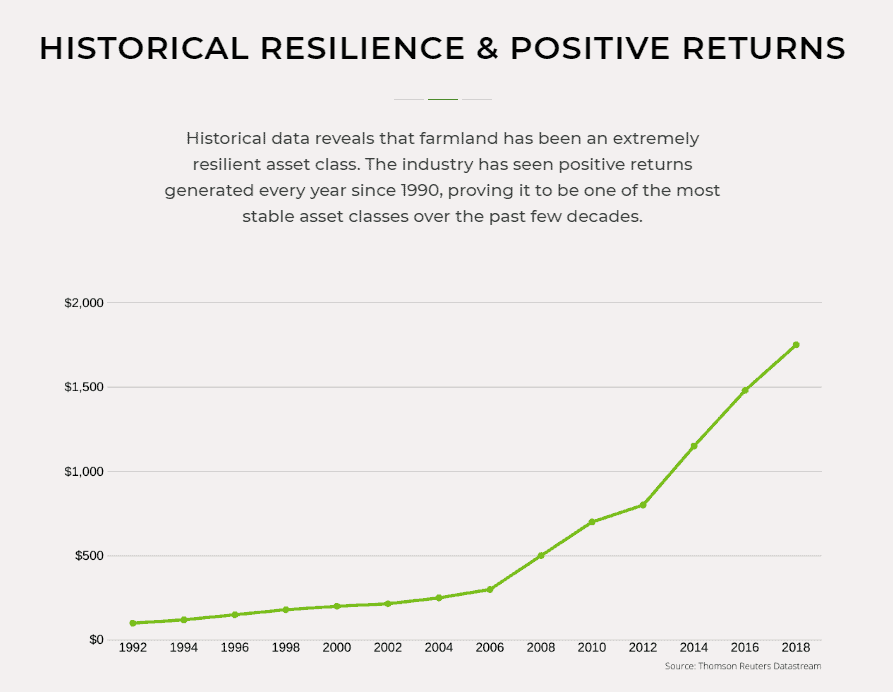 On the FarmFundr platform, each deal will have a different fee structure. However, there are two typical types of fee structure that deals are likely to fall under.

On some deals, FarmFundr will take an equity position in the deal in exchange for managing it. For example, their California Almond Orchard didn't charge any management fees, but FarmFundr received 15% of the deal.

Additionally, on this deal, roughly 12% of the funds raised went towards costs associated with “developing and operating” the almond orchard. These funds went directly to FarmFundr and also helped to cover some of the company's expenses.

The California Almond Orchard will also pay a 0.40% fee to Farm & Land annually. Farm & Land is an affiliate of FarmFundr's manager and will be managing the farm. They may also receive additional fees for harvesting and cultivation.

In general, the fee structure is not as uniform and transparent on the FarmFundr platform. You'll have to do a bit of digging on their site on the deals that interest you to get the full picture.

While everything seems to be above-the-board, some of the deals are bought from the CEO. The related-party transactions may present some apprehension for some investors concerned about where their fees are going.

For deals that do not include an equity fee, FarmFundr will typically take a 0.75% – 1% management fee. Additionally, on these deals, it is likely that there will be a 3% fee paid to the deal sponsors. FarmFundr has a lot going for it. The unique deal structure that allows investors to participate in crop profits and the increased upside potential is attractive to many.

Additionally, the experience of the CEO and management team builds confidence in the platform as a whole. As the global population expands and requires more food, FarmFundr puts investors in a good place to profit.

However, there are some areas for concern on the platform. Namely, the potential for conflicts of interest to exist between the CEO and investors.

If the CEO sells one of his properties to investors and has the power to unilaterally set the deal structure and fee schedule, there may be some fee inflation taking place. This is purely speculation, but the related-party nature of many of the deals on the site leaves some unanswered questions.

In the end, farmland as an asset class has consistently outperformed almost all other asset classes. People need to eat, and we don't anticipate that changing anytime soon. An investment in farmland can be an effective hedge against inflation and a strong play for diversification.

Whether or not FarmFundr makes sense for you, we believe that farmland has a place in the portfolio of most investors!