Some of the links on this site are affiliate links.

In January 2021, Bill Gates became the largest owner of farmland in the United States. In fact, Gates is the owner of over 270,000 acres of farmland, which is worth over $700 million!

Many people wonder why Bill Gates would make these moves with his investment portfolio.

To better understand these questions, it's helpful to review Bill Gates' financial decision through the years, especially as it relates to Microsoft, Cascade Investments, and The Bill and Melinda Gates Foundation. Thus, before we answer these questions, we are going to provide a brief summary of his financial history.

Since its IPO in 1985, Microsoft has seen continual success. However, Microsoft wasn't Bill Gates' only successful venture.

His idea, like many others, was to diversify his investments across different asset classes.

Based on Bill Gates’ budding friendship with Warren Buffett, Cascade adopted much of Buffet’s approach to investing: invest in good companies, and hold long term to see healthy returns.

In 1999, Cascade Investment made an interesting decision: Gates sold over 7 million personal Microsoft shares to further diversify his portfolio.

This position in Microsoft was quickly funneled by Cascade Investment into this long term growth strategy. It was near-perfect timing too, as 2000 would quickly see the infamous tech crash of “dot com” stocks.

While Microsoft took a major hit in the tech crash of 2000, Bill Gates’ portfolio with Cascade would gain around 40% return in that same year. Talk about big bets.

By divesting his personal wealth from his own thriving tech company, and diversifying into myriads of other non-tech based businesses, he was not only exceptionally protected against the tech crash of 2000, but made out like a bandit.

Not only was he no longer reliant on his own company’s success for his own personal wealth, but he set himself up to make even bigger moves in the decades to come.

The Bill And Melinda Gates Foundation

In 2000, the new Gates foundation launched with Bill, Melinda, and Warren Buffet on the trustee board. Bill left most of his professional work at Microsoft at this time to work with Melinda and the foundation.

In the past 20 years, the foundation has grown to hold over $48 billion. It has also funded myriad research facilities and humanitarian operations, focusing on overcoming diseases, climate change, agricultural research, and health and nutrition in underdeveloped areas.

Though the Gates Foundation has spent so much time and resources on helping humanity – more than any other private entity in history – the sheer power their enterprise wields has drawn the attention and fear of many.

Some of the biggest critics of Gates have deemed his philanthropy as a budding ‘technocracy’ – a “tyranny of experts” that both centralizes power into a private corporations’ interests.

However, the Gates Foundation has been largely transparent at every level of their operations – from their objectives, means, successes, and failures.

In their 2018 annual letter, the Gates Foundation answers the top ten questions they received, and they admitted that they didn’t think it was fair that their family had so much global influence. Gates also owned up to the various failures in their initiatives, and admitted that they try their best to leverage the expertise and wisdom from the community leaders present in the areas they aid.

Why Farmland, Why Now

So, what's the interest in farmland? Any why now after years of massive success?

Farmland is what is known as an ‘alternative asset’ – an investment that can grow wealth outside of the stock market. When it comes to alternative assets, there are a few options investors can look at such as real estate, fine art, foreign stocks, cryptocurrencies, even NFT’s (verdict still out on them). 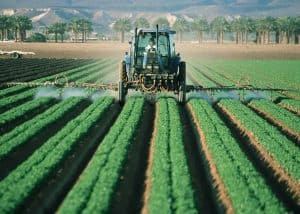 One main benefit to alt assets – especially for those who’re heavily invested in the stock market – is you can diversify your overall investment portfolio outside the NYSE/NASDAQ.

This is especially helpful if, say, the stock market crashed, and you had a more aggressive stock portfolio (or any large stake in stock at all). Think about how much Bill Gates would have lost if he hadn't diversified in 1999.

Where farmland differs from other alt assets is that because it’s such a crucial human resource (food = humans), in less-than-desirable economic situations, farmland tends to appreciate even further in value, as opposed to losing value (I.E., during a dreaded stock market crash).

Because of this crucial factor inherent to farmland, it also tends to provide better, consistent returns during times where inflation rises – another scenario where more ‘traditional’ assets like stocks and real estate suffer in.

Also, because you’re investing in the land itself, your investment not only is quite resistant to depreciation, but also provides some solid tax benefits due to be land ownership. You’re not investing in a building that will decay over time, but the rich farmland itself.

There’s a lot of little benefits that stack up when talking about farmland, but the biggest is likely the fact that farmland returns historically out performs most other investment vehicles, and is also comparatively the least volatile asset among the bunch.

“Why doesn’t everyone just invest in farmland then? Why am I just learning about this NOW?”

Well, as with everything in life, there is always a trade-off – especially in finance.

Farmland has some natural ‘built-in’ drawbacks for all of the built-in benefits:

How To Invest In Farmland

Just 20 years ago, it was difficult to invest in farmland if you weren’t already independently wealthy. You either had to directly buy the land, pony up millions to participate in a fund or purchase farmland via a REIT.

In the same way you can invest into ETFs (Exchange Traded Funds) in the stock market, there exist similar products for farmland called farmland REITs.

Neither of these are a perfect option. Farmland REITs have a high degree of correlation with the overall stock market, and returns tend to be lower than less liquid farmland investments. Purchasing your own farm outright means that you are not diversified across many farms; just 1.

However, there are also countless farmland investing platforms gaining traction now too. These allow investors to get stared with as little as $10,000.

The Gates Foundation has seen steady success and growth since their launch, funding science, research, agriculture and education.

Bill and Melinda released their latest initiative, “Bill Gates’ Big Bet”, where the Foundation states they’re betting on the major success of developing nations within the next 15 years, hoping to see more improvement than at any time in history.

The Gates Foundation has focused their efforts on alleviating the aftermaths of climate change since its founding. In their Big Bet, they recognize that the impoverished people stand to be impacted the most by these changes.

While the global climate change initiative is trying to reduce total emissions by the year 2050, the year 2030 is also important. Essentially, by year 2030, the estimated results of what carbon emissions (and their effect on the environment) will look like in 2050 will be decided in full.

Thus, in Gates’ mind, it’s extremely important to help empower these developing peoples before that year comes to fruition.

The main outline of the Big Bet is:

Featured in the agricultural side of their plan is a strategy for subsistence farmers and other small-acre farms in Africa and the developing world education, resources, and layaway payment plans which can be used through smartphones.

These subsistence farmers can order equipment and seeds they need, paying what they can over a longer period of time.

Another main feature of the Big Bet is the implementation of the culmination of the Gates’ Foundations research: specialized GMO seeds for different crops that have been gene edited to be “pest-proof, flood proof, disease proof, and climate change-resistant”.

Partnering with Monsanto to create these super seeds is also part of the plan.

With all of this recent farmland accumulation, one might think Gates is using this land to research these gene edited super seeds.

Interestingly enough, though the Bill and Melinda Gates Foundation is working on this agriculture initiative. Gates’ personal farmland portfolio is managed by Michael Larson and Cascade Investment.

The Gates Foundation isn’t the entity utilizing the land, but rather just Bill’s family office. As we learned above, in most farmland investment situations, the farmland owner leases their land to tenant farmers, who usually live on and work the land.

Gates' interest in farmland is still strong. In fact, in June of 2022 he secured an additional 2,100 acres of farmland in North Dakota for roughly $13.5 million. The total portfolio of farmland is worth well over $700 million.

The 2,100 acre potato farm adds to his massive portfolio of farm investments.

Since his divorce, it is unclear how the assets were split up between the couple.  In addition to farmland, the Gates' portfolio includes numerous public investments, the Gates Foundation, a major stake in the Four Seasons Hotel, and much more.

Officially, the general public doesn’t know exactly what Bill Gates’ growing farmland estate is being used for. However, when you read between the lines with an objective and open mind, one can infer much.

Here are a few “likely” reasons why Bill Gates is scooping up farmland:

Whatever you may think about the man himself, he has consistently made investing choices that brought him unusual and incredible returns, and this has brought him great wealth when others made the wrong fiscal moves, and lost much.

Bill Gates was right when he sold his own Microsoft stock to diversify through Cascade in 1994.

He was right when he predicted the COVID-19 epidemic in 2015.

Bill is now the biggest owner of farmland in 2022 – a great hedge asset against rising inflation.

If you’ve been on the fence about getting into farmland, maybe now is the time to reconsider.